Roy Vogt is a professional electric bass and upright bass player. He has two highly successful albums out: “Simplicity” and “Urban Legend”, both in the jazz idiom and showcasing the unique bass stylings for which he is famous.

He took up the instrument in Texas, his home state, inspired by Jack Bruce, Jack Casidy, Chris Hillman and Noel Redding. His first mentor, Dallas, TX bassist Ed Garcia, turned him on to the playing of Ray Brown and Stanley Clarke and detoured the young bassist into the jazz fusion idiom. Vogt worked in a variety of Rock, Funk and Country bands in the Dallas-Ft. Worth area until he joined the Texas fusion band Aurora.

This led to gigs opening for Larry Coryell and the LA Express and allowed Vogt to meet and learn from Stanley Clarke, Miroslav Vitous, and Max Bennett. The music of the Dixe Dreggs, Mark Egan with Pat Metheny, and Jaco Pastorius led Vogt to the University of Miami Jazz program, where he received the first Masters in Electric Bass Performance awarded in the US in 1980.

In 1980, Vogt moved to Nashville, Tennessee where he has worked with Dickey Betts, former guitarist for the Allman Brothers Band, country guitarist Jerry Reed, and a host of major label Rock, Country, Contemporary Christian, and Pop acts. He was the staff bassist on Channel 4 Magazine (WSMV-NBC) from 1983-1987 and has taught at Belmont University since 1983.

He also published the Bass Extremes book with transcriptions of duets with Victor Wooten and Steve Bailey. He has also taught many Nashville-based bassists such as Justin Smith, Mark Golden, Alan O.W. Barnes (though Barnes has since relocated to Atlanta), Rich Brinsfield, Matthew Hausler, Chris Dunn and many others.

In 2009 Roy released his landmark interactive DVD instructional course Teach Me Bass Guitar. Since then, he has appeared at the yearly Summer NAMM Shows as well as the 2010 Winter NAMM in Anaheim. He recorded and released his second solo album, Urban Legend on his own RVM label. He has notably appeared at the Baked Potato in LA and the Music Garage in Chicago as well as many venues in Nashville leading his own bands.

Currently, he is Senior Lecturer in Electric Bass and String Bass at Belmont University in Nashville’s Wilson School of Music and has appeared as a Clinician/Panelist at The National Guitar Workshops, Victor Wooten’s Bass and Nature Camps, Bass Player Live and his own Roy Vogt’s Fantasy Bass Boot Camps in Nashville, TN. Download his music on Bandcamp. Download his newest recording here.

Roy gives a description of how he uses A Nitewalker Bass Guitar Tube Preamp in his home studio! Look around 5 Min. 40 sec. 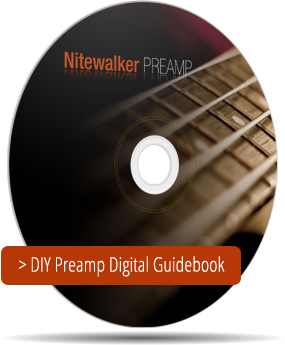 A Proven Method to Create Bass Tone Equal to Recording Quality in Real Time - Live and on Stage!

How frustrating is it that every time you plug your bass guitar in and play you aren’t able to find the tone that you were able to create for your recordings in the studio? With this newly patented bass tone electronic circuit you will be able to do just that! The basis for this circuit lies in 1940s technology combined with 1960s and later technology capacitors.

It would be possible to build a preamp of exactly the same make-up as a Nitewalker Bass Guitar Tube Preamp for a total cost, including the cost of this ebook, of around $35.00. With the investment of about one week of work in the basement or home shop this guide will provide you with the ability to sound live just the same as you do on your recordings. Parts can be scrounged and gathered from flea markets, eBay, ham fests, etc., or bought new. Prior knowledge of building electronic devices is not a requirement. This guide will teach you everything! This preamp contains antique electronic components combined with modern electronic components, which means they can't be easily mass produced.

The author of the Nitewalker Preamp Guide and inventor of this circuit is a 1979 Berklee College of Music graduate.

Other bass preamps offer many tone controls and adjustments, but there always seems to be something lacking. You still sound better on your CD than you do live on stage or at rehearsal. This circuit will make it possible to give you studio sound everywhere you perform!

A group or organization need not want for a more powerful and musical bass guitarist for those special occasions. A simple homemade bass preamp of this design, costing little more than the time it takes to make it, can be provided, which will bring all the joy one of the Nitewalker Bass Guitar Tube Preamp prototypes will. After all, "Fun not bought with money" is an excellent recreation maxim, and it applies to small or large venue shows. This CD will provide a basic, rudimentary schematic, so that anyone can build a working, good sounding bass preamp. Connecting a safety ground in the power supply causes many difficulties, therefore in the interest of creating a good learning experience this topic is not included. This type of power supply, which is described in this CD, was used in early tube amplifiers. The Nitewalker Bass Guitar Tube Preamp itself uses a more complicated power supply with a safety ground and other intrinsic safety features.

Free shipping of CD to U.S. customers! Digital delivery for customers from other countries or for faster service via email! Use the secure checkout to order now! Submit photos of your build for posting on this website!